Give it up. Young Justice is cancelled. No one will admit it, but let’s keep it real.

Because you love it. Because you want it. Because it was worth watching. Because these are the finest renditions of the characters ever written. Because the artwork has been head and shoulders above anything that resembles a cartoon in your lifetime. Because you are engrossed in the lives of the teenagers who are living the lives we would all give an arm to have, to be the living agents of the greatest superheroes the world has ever known. (And no, I don’t mean the Avengers.)

I mean the team that inspired the creation OF the Avengers. The Justice League and their young prodigies have NEVER looked so good. Moved so well, been so awkward, felt so human. Everyone remembers Superman’s face when Batman suggests he do something about Conner… Superman stop that meteor. On it. Superman, mentor that boy with your genetic structure and superhuman abilities… Uh… Do I have to?

Have you learned nothing from watching television all your lives? If you love something you must keep that love in your heart. Never shout it to the world where a television executive might hear it.

It is in their DNA to destroy that which you love. The Simpsons? It will be shown to YOUR grandchildren. Family Guy? Will go on until Seth can’t stand another day of being Brian. AdventureTime? Regular Show? They will outlive us all. But JLA, JLU, Young Justice, they can only live as long as you or I DON’T love them out loud. 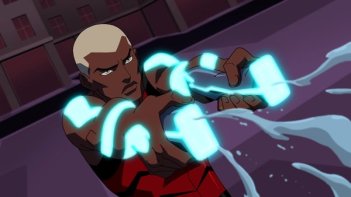 Once a television executive know you love something, it will die the most agonizing death possible. Can you say Farscape, Fringe, Serenity, X-files, Stargate Universe, Jericho, The Event, the 4400, do I really need to go on? Claiming some mysterious force which does NOT kill those other shows we can’t stand, Shows like Young Justice will enter alternating seasons, half seasons, movie-closures where they squeeze an entire season into an hour badly, or some other machination to make you hate the show, or hate the time slot or hate the producers until you BEG FOR ITS UNTIMELY DEATH to stop its (and your) suffering.

Remember Young Justice for what it gave to you. Remember Robin, become Nightwing, remember Kid Flash (souvenir!) try to forget Megan (they never got the character right for me) remember and marvel at how awesome Aqualad had become (whenever you hear there is no market for Black characters, spit on the shoes of whoever says that). Well-written Black characters like Aqualad shine like stars.

Think kindly of the writers who gave voice to the heroes and the villains (because where would we be without writers OR villains). They filled out our universe from which all of our heroic aspirations could be seen, even for this brief time. Think kindly to the many, many, many animators who create every frame of this show with a quality control ethic unseen by American television cartoons.

But most of all, think kindly of the executives too stupid to recognize that right now more than ever, people need heroes. Kids need heroes and the world sure could use more of them like the heroes of the Justice League and Young Justice. They will be missed.