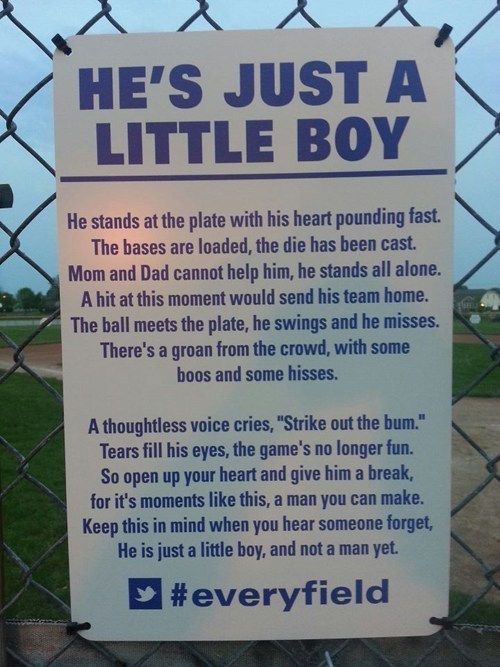 But here is the truth. It’s not about you.

It’s not about him being a representation of you. It’s not about your having a second chance to live vicariously through your son. It isn’t.

And that is a hard thing to admit.

Because, if you are lucky, will see yourself again and again in your son. When he goes to bat, when he is on the field somewhere, when he struggles with is homework, when he fails in a spelling bee, when he scrubs out on his brand new bicycle. When he goes to high school, when he stays out late, when he doesn’t get into the college you think he should.

When he defies you and tells you to drop dead.

He is as he should be. When he is a little boy, the man he becomes is directly proportional to the love, support and willingness to let him succeed or fail on his own merits. Teach him to play, teach him to excel, teach him to fail well.

Then step back and let him grow. Be there with him both when he succeeds and more importantly when he fails. Both have lessons he will need to learn and no one will ever teach him better than you.

Except maybe Mom, but we’ll keep that under our hat. He’s not a man yet. And every day you spend with him will make him the man he’s supposed to be. And that’s not you.

And that’s okay. Grow with him.